No matter what kind of car you drive, it will surely have a battery in it. But if you are unable to start the engine after turning your key in the ignition, then you can use a multimeter to conduct some tests on your battery to see if it’s still good.

When you test your car battery with a gauge, a good reading would be around 12.6 volts. The best way to get an accurate reading is to leave your car battery off for over an hour, or just test it in the morning after it’s been idle all-night long. Then you will get what is known as the “resting voltage,” which will truly tell you whether your battery is still good or not.

If you drive for a long time and then stop to test your battery, the reading is going to be much higher because it has recently been so active. This will give you an inaccurate reading of its true voltage.

It is easy to use a multimeter to test a car battery. You just need easy access to the metal terminals of your battery, which exist on either the front or top of it. When you open the hood of your vehicle, you should see the car battery on the left or right side where the engine bay is located. If you don’t see your battery as soon as you open the hood, then you should check your owner’s manual to find out where it is. Newer vehicles have plastic covers over the batteries which can be removed either by unscrewing, unclipping, or unbolting the cover. If the positive terminal (+) has a red cover on top of it, you should be able to take it off either by snapping it open or lifting it off. Once you can see the battery, keep all metal objects away from the terminals. This means no metal tools like wrenches should be anywhere near the battery.

Using a Multimeter to Check the Car Battery

When you use your multimeter to conduct the first test, you will be measuring the direct current voltage. Where you see the letter “V,” look above it and you will notice dashed and solid lines that indicate the voltage. Turn the dial so that it is set to 20. This will give you the ability to measure from 0 to 20 volts.

Another thing to remember with newer cars is that if an electrical source causes the power to be drained from the battery, this is called “parasitic loss.” This can happen when your engine and all the vehicle’s lights are turned off too. Why? Because there are certain electronic systems and features in your car which are still consuming power after your car is turned off, such as the clock and computer. These things won’t normally drain too much power from your battery but if you suspect they are, then either remove the battery completely or simply disconnect it.

If the reading shows under 12.6 volts, then you will need to disconnect the battery first. Then grab your battery charger and charge the battery until it is full. Let the battery rest for one night and then test it in the morning to see if the battery can hold a charge this time. It can without being connected to the vehicle, then there is a source within your vehicle which is draining the power from it. This is something other than your clock and computer. 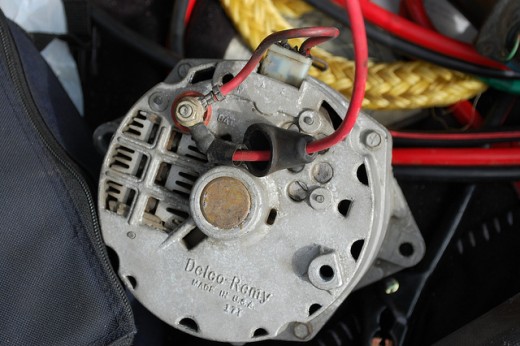 Using a Multimeter to Check the Alternator

The battery gets its charge from the alternator. This is a device driven by a belt which transmits energy to the electrical systems of your vehicle, and it gives your battery a recharge.

When you go to test the alternator with the multimeter, you will do it the same way as you did the battery test. Be sure to keep your engine running this time as you do the test. Your alternator will be good if you get a reading of at least 13.8 volts, but preferably up to 14.4 volts.

If you have less than 13.8 volts or higher than 14.4 volts, then your alternator is undercharging or overcharging. Either one of these situations could mean that your battery life is running short and that you need to investigate the problem further.

A car battery doesn’t just go bad completely. There will likely be one or more battery cells which are bad in it. You will know if this is the case when you start your car because it will take more time to crank up the engine.

The newer batteries in cars don’t give you access to the cells because they are meant to be “maintenance free.” But if you have an older battery, you will be able to view each cell. There may be a plastic cover over the cells or a separate cap for each one. Be careful if you decide to investigate the battery cells because they contain sulfuric acid mixed with water. If you were to get this mixture onto your skin, it could become very painful and lead to an injury.

If you want to test the cells individually, then a hydrometer-type of battery tester is needed because it can measure the battery acid’s gravity. You will know if the cell is bad or good based on how many balls are floating. Even if you know that you have dead cells, it would be like knowing that your battery can’t hold a charge that is 12.6 volts. Therefore, you might as well do the resting voltage test because it is faster, easier, and just as effective.