In the unfortunate event that your vehicle is involved in a serious collision that requires a tow truck in Perth, it’s vital that you’re able to correctly diagnose which parts of your car have been affected. Being able to identify compromised components is key for ensuring your car is safe to drive and minimising risk for you and your passengers. Depending on the severity of the accident, the damage will be immediately obvious, but in other cases it may not be apparent from the outside or until you carry out a more thorough inspection.

One part of your car that is notoriously difficult to visually diagnose is the suspension. In the days following a collision, your top priority will probably be repairing the body of the car and restoring the exterior of your vehicle to its former glory. This is particularly true if the engine is still functioning and the chassis looks – on a superficial level, at least – to have survived intact. However, once you get under the car (which may not happen until the final wheel alignment), you may be shocked to find the suspension has sustained some serious damage that will need to be rectified before you can even think about getting your car back on the road.

Thankfully, this issue can largely be avoided by taking the time to carry out a thorough inspection both above and below your car’s chassis after a collision. We’ve rounded up everything you’ll need to know to diagnose potential problems with your vehicle’s suspension system. Understanding the Basics of Suspension

Before we get into the nitty gritty of diagnostics, it’s important to have at least a fundamental understanding of how your suspension works and the role it plays in the wider functioning of your vehicle.

While a car will happily function without any suspension system at all, there’s no denying that it makes an enormous difference in terms of handling, comfort and overall drivability. Essentially, suspension acts as a cushion between you and your passengers, and the surface of the road. Without a suspension system, you would be in direct contact with the road and feel every tiny bump and crack in the driving surface, which would make for a very uncomfortable driving experience.

The stiffness of the suspension can vary a lot between vehicles and usually depends on what role the car was originally designed to play. For example, in a high performance car, the suspension is usually fairly stiff, which sacrifices comfort in the interest of giving you the control you need to master tight turns at speed. In contrast, the soft suspension of a luxury sedan is all about maximising comfort for the occupants of a vehicle. The car won’t have quite the same ability when it comes to cornering, but it makes up for it by creating a very comfortable ride.

Despite the differences in functionality, stiff and soft suspension are visually very similar. Most of the time, we think of suspension as a few key components (such as tires, springs, shock absorbers and so on), but when it comes to collision repair we have to expand this view. Other components such as the driveline, CV joints and axles can all sustain damage in

the event of an accident and may need to be inspected. In fact, any component that is used in the steering, stabilisation or propulsion of the vehicle should be investigated and assessed for damage.

The Importance of Front Suspension

In years gone by, the vast majority of vehicles were rear-wheel drive. Fast forward to present day, however, and rear-wheel drive layouts are mostly restricted to luxury vehicles and purpose built trucks, leaving most modern cars front-wheel drive. This means the front suspension plays a critical role in many aspects of a vehicle’s functioning. Not only is it integral for steering and stabilising, it’s also responsible for propelling the vehicle forward.

When it comes to rear-wheel drive front suspension, many types of configurations are possible, which makes it difficult to talk about diagnostic procedures for every single possible variation. Instead, we’re going to focus on the conventional setups that you’re most likely to encounter.

Generally speaking, a generic rear-wheel drive front suspension is made up of a few key components, including:

● The hub, bearing and steering knuckle

● The lower and upper control arms 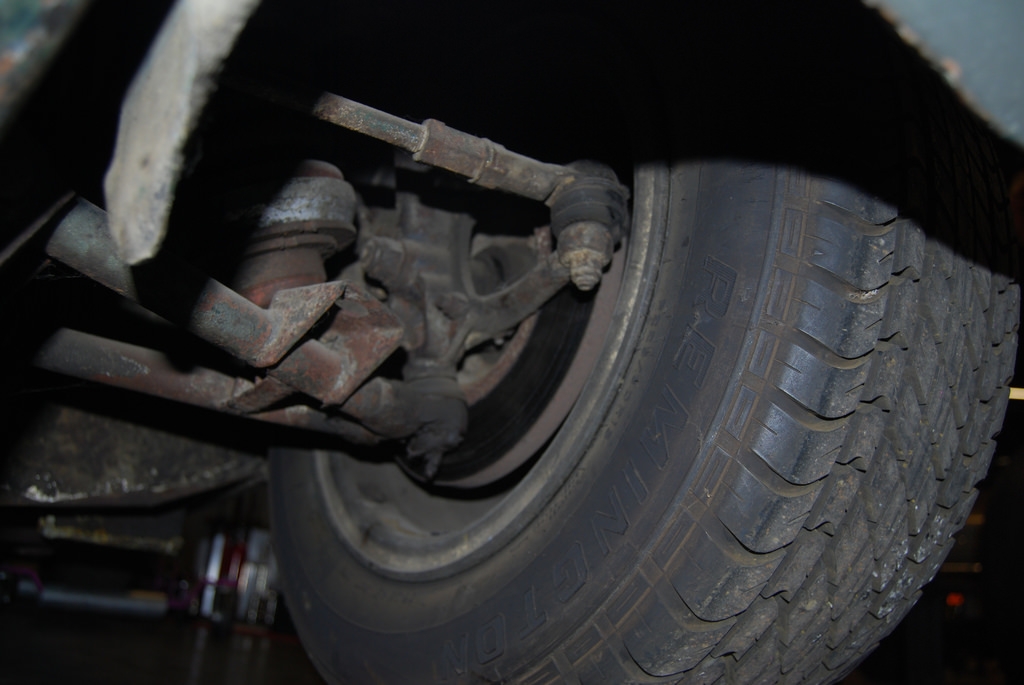 The Importance of Rear Suspension

Depending on the make and model, the rear suspension in modern cars can range quite drastically in complexity and functionality. As with front suspension, rear suspension can be configured in a number of different ways, but again we’re going to focus our efforts on a typical, basic setup that might consist of:

● The bearings and hub

● The lower and upper control arms

While configurations may differ between vehicles, diagnosing possible problems is a relatively straightforward process. The majority of parts involved in suspension systems are made of steel and/or aluminium and as a result cannot be repaired should they happen to get warped or twisted in a collision. Although it may be physically possible to bend the metal back into shape, the component will never be as strong as it was originally and may pose a

serious risk. If any part of the suspension is damaged in a collision, replace it entirely with a new component.

It goes without saying that no two collisions are the same. Not every accident will result in suspension damage, but there are some scenarios where the chances are fairly high. These include collisions where:

● The front wheels were directly damaged

● The unibody, front rail or cowl have been damaged

● The car went off road during the accident

In these cases, you’ll need to get the car up on a hoist so that you can have a good look at the suspension and identify any issues. Be sure to remove the wheels and other components that may get in the way.

If you’re a technician carrying out an estimate, it’s vital that you obtain proof of damage during this inspection. Even if you strongly suspect a part will need to be replaced, avoid including it in the estimate until you have clear, concrete evidence. Doing so helps eliminate any ambiguity and ensures that you, the client and the insurance company are all on the same page when it comes to the final quote. In an ideal world, you’d be able to write your estimate before the customer even gets out of the car. Of course, this isn’t always possible, so just try to inspect the car in a timely fashion and concentrate your efforts on getting the car repaired and roadworthy once again.

Whether you’re a technician or a regular driver, the good news is that diagnosing suspension system damage usually doesn’t require complicated tools. Indeed, in many situations all you need is a tape measure or a simple tram gauge to accurately measure certain parts of your car. This is due to the fact that suspension systems have to be made to very exacting standards (the details of which should be available in the manufacturer’s specification book). For example, if the measurements of the suspension mounting are off by even a small degree or outside certain parameters as specified by the manufacturer, it’s a very reliable sign that some components of the suspension system have been damaged and will need to be addressed. Be sure to document your findings on paper or digitally, and take photographs along the way as evidence. What to Look for When Diagnosing Suspension Damage

So, after getting the car elevated, what should you look for? Well, one of the key telltale signs of damage to the suspension is a difference in the wheelbase. Simply measure the distance between the front and rear wheels on each side of the car. If there’s a discrepancy, there’s a pretty good chance that the suspension has been damaged in some way and will require further attention.

From here, it’s a relatively simple matter of inspecting the various components. Take a good look at the knuckles, being particularly mindful of any visible cracks or obvious imperfections

in the metal. In addition, be on the lookout for any paint or coating that is flaking around the steel components or on the control arms, as this may also be an indicator of damage.

It’s also a good idea to inspect the suspension mounting points to see if anything has come loose. While the car’s up on the hoist, also be sure to take the time to investigate the shocks, as they are quite vulnerable in some makes and models and can be easily damaged in a collision. Have a look for leaks, punctures and other damage. If the shocks are warped, they’ll need to be replaced.

Looking beyond the shocks, you’ll also need to examine the drive axle for damage. The type of damage will vary depending on the nature of the collision, but might involve tears in the boots situated on top of the CV joints. CV joints play an integral role in the functioning of any vehicle and are responsible for connecting the drive axle to the transmission and the wheels. These components will need to be investigated thoroughly, particularly if it’s a front-wheel drive vehicle that has sustained damage to the front during the collision.

It’s worth noting that the integrity of a CV joint can be compromised by seemingly small obstructions that may seem unlikely to cause extensive damage. For instance, if dirt, stones or other contaminants get into the joint, they can damage the component and eventually erode the joint to the point that it will need to be replaced. The axles themselves are fairly sturdy, though they are prone to bending during the force of an impact from certain angles. If you’re uncertain about the axle, don’t hesitate to have it looked at by a specialist.

The Importance of Documentation

We touched on it earlier in this article but it’s worth repeating again: documenting damage is absolutely critical if you’re a collision technician or involved with the insurance industry. Having an accurate record of the damage and corroborating photographs provide solid evidence that is impossible to refute if any of the affected parties wish to challenge your quote or estimate. In addition to the legal aspect, it also helps you identify damage that would usually go unspotted in a cursory investigation. This can dramatically reduce the amount of time spent on repairs and ensure the vehicle is back on the road as quickly as possible, which is ultimately in everyone’s best interests.

In summary, being able to spot the telltale signs of suspension damage caused by a collision is a fairly straightforward process. All it takes is a bit of understanding of how a vehicle’s suspension system actually works and the components that are most prone to damage during a collision. Equipped with the information laid out in this article, and access to a hoist and some simple measuring tools, you’ll be better able to diagnose potential issues with your vehicle’s suspension system and get your car back on the road safely.

If your car has been involved in a collision that affects its mechanical functioning, the first thing you need to do is get it off the road and to a mechanic. No matter the severity of the collision, you need a tow truck service you can rely on. Here at Executive Towing Services, we’re proud to be the vehicle towing company of choice for customers across the Perth region. Established back in 2005, we have extensive experience dealing with all types of vehicles and have the expertise required for all your vehicle recovery needs. Give us a call today on 0410 471 056 to learn more.