The catalytic converter is an extremely important part of your car, one which needs to be kept in top working condition if you’re to avoid preventable problems. Tow trucks are frequently called to assist stranded motorists who’ve run into trouble because of a bad catalytic converter, as if it fails, your car can lose power completely or you’ll stall when idling and you won’t be going anywhere fast anytime soon.

Catalytic converters are also one of the most important safety devices a vehicle is fitted with, as they perform the essential function of converting three harmful chemicals – hydrocarbons, carbon monoxide and nitrogen oxides – into relatively harmless compounds. Without a correctly functioning catalytic converter, drivers, their passengers and others would be put at risk of carbon monoxide poisoning. And then there’s also the environmental damage that would be caused, as hydrocarbons and nitrogen oxide produce smog, with the former also a notable contributor to acid rain.

This essential vehicle part was designed specifically to decrease pollution caused by the combustion of hydrocarbon fuels (fossil fuels). Studies show that over the course of a vehicle’s expected lifespan, a correctly functioning converter will reduce carbon monoxide by as much as 85%, nitrous oxide by as much as 62%, and hydrocarbons by as much as 87%. This means we all need to ensure the converters on our cars are working correctly if we’re all to play a role in reducing global warming. In this article, we discuss how to diagnose a bad catalytic converter with some simple troubleshooting tips.

How to Tell If You’ve Got a Bad Catalytic Converter

If you’ve got a bad catalytic converter, chances are your car will let you know. Most modern cars will alert drivers by showing a Check Engine Light (CEL) symbol or a trouble code (e.g. P0420 through to P0423). There are other signs that should alert you to catalytic converter problems, such as:

Problems like those abovementioned are usually caused by the vehicle’s engine or exhaust system malfunctioning or not working as efficiently as they should. If your catalytic converter is damaged, it’s most likely due to contaminants (coolant, engine oil, etc.) that have made their way from the engine into the exhaust system, and then into the internal workings of the catalytic converter.

When a major problem like losing all engine power occurs, many car owners replace the converter. However, this isn’t a cheap car part to replace and it may not need replacing at all, but instead a bit of troubleshooting to identify the issue and seek a more affordable solution. Once you’ve located the converter/s under your car, between the muffler and the exhaust manifold, you can then use the following troubleshooting techniques to diagnose converter problems and take action early on.

Before you get started, please note that you’ll need tools to conduct these tests. Along with a kitchen thermometer, for some tests you’ll also need a vacuum gauge and a back pressure gauge, both of which are fairly inexpensive pieces of equipment that you can find in your local auto store. If you’re a tinkerer, you’ll find plenty of things that you can check and repair on your car with these gauges.

An infrared thermometer is another handy tool that you can use for the following tests and many more. If you don’t have a kitchen thermometer and you’re thinking of buying a thermometer to troubleshoot issues with your catalytic converter, consider heading to a local auto store to get one.

How to Check a Converter for Efficiency With the Temperature Test

If your catalytic converter is no longer efficient, your car will likely let you know by showing a malfunction indicator light (MIL) or check engine light (CEL). It may also show a trouble code. If you don’t see any of these lights or codes, you can test the efficiency of the converter with a kitchen or ultra thermometer. To check converter efficiency with a thermometer the engine needs to be at regular operating temperature, so this is best done once you’ve arrived home from work, or take it for a drive (if you can safely) for about 15-20 minutes to warm it up before parking it on a flat surface.

Most cars will display the CEL or MIL light if they sense that a converter issue is hindering vehicle performance and causing damage. However, it’s still advisable to check converter efficiency using a thermometer as you may be able to identify a problem early on and avoid expensive repairs. 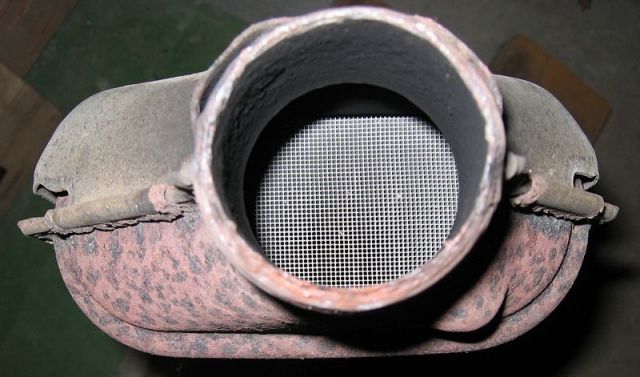 While a restricted converter could be the reason why your car has lost all power, there are a number of parts that may not be working correctly and could be the actual cause of the problem. If you believe your converter has become restricted due to clogging, test it with a vacuum gauge.

You can continue testing if you like by slightly loosening the back pipe from the converter to allow a little gas to come through. Some drivers prefer to go straight to this step as it’s a more reliable way of diagnosing a restricted converter, but if you’re not comfortable tinkering further and you’ve already done steps 1-7, call the testing quits now and take it your local auto repairer. Please note that you shouldn’t make any adjustments to your car beyond what you’re comfortable with, it simply isn’t worth the risk.

Checking for a Restricted Converter – Back Pressure Gauge Test

This test is similar to the last, though this time you will be checking for clogging or blockages at the exhaust system and using a back pressure gauge instead of a vacuum gauge to take the pressure reading. You will need to locate the oxygen sensor for this test and it can be difficult to remove, so you may find it helpful to check your car manual. To make the test easier, you may like to locate it, remove it and replace it (see below for instructions) before proceeding with the following steps.

This is a fairly simple test for most drivers with basic car knowledge, though even those who’ve done this kind of thing before may find removing the oxygen sensor tough going. Should you find yourself struggling to remove the oxygen sensor, usually because it’s stuck to the manifold or exhaust pipe, follow these steps:

Please take care with this test as you’ll be working in close proximity to parts, like the exhaust pipes and manifold, that get extremely hot. We can’t stress enough just how important it is to take care when removing oxygen sensors and checking the catalytic converter for damage. 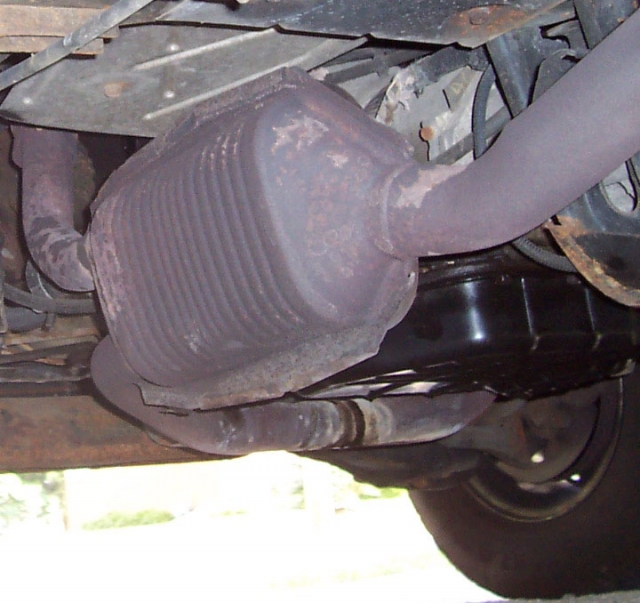 Checking for a Damaged Converter – The ‘Tap, Tap’ Test

Please don’t use a hammer or a metal mallet when conducting this test, as the force of a hard object could cause damage instead of identifying it, and be sure to tap the converter gently. You really don’t want to break it, plus you don’t need to tap it hard to hear the substrate inside.

Catalytic converters are made from a combination of several materials, with different materials used in different makes and models. These materials include ceramic and metal (the core of the converter), along with titanium dioxide, silicon dioxide, aluminium oxide, platinum, cerium, iron, manganese, nickel palladium, rhodium, alumina and silica. While these are hardy materials, they are still susceptible to damage and like all major car parts, catalytic converters aren’t cheap to replace.

Nevertheless, you can save yourself time and money with a few simple steps. As mentioned earlier, in most cars the converter will outlast the engine, provided that it’s kept free of contamination. That means regular engine maintenance and having all vehicular problems seen to immediately are essential steps in keeping your catalytic converter in good condition for longer.  You should also:

It’s rare for a catalytic converter to stop working due to age, with most converters failing due to issues such as contamination by oils, coolants and unburned fuels or the engine overheating. The importance of keeping up to date with your car’s scheduled servicing and having repairs carried out immediately can’t be stressed enough, as failing to address vehicular issues early on is the leading cause of all catalytic converter issues.

It’s also worth noting that catalytic converters are targeted by thieves who sell them for scrap. If you park your car in a public carpark regularly, you may find it advantageous to buy a clamp that will keep the converter firmly in place. Some late model SUVs, especially Toyota SUVs, are reported to be targeted by thieves because the metal the converters are made from has a higher resale value, plus SUVs and 4x4s with raised suspensions are easier to crawl under.

Save yourself time and money, and minimise the chances of finding yourself stranded by the roadside awaiting a tow truck, by keeping your catalytic converter in good working condition.