An engine cannot function or perform properly without a timing belt. It connects the camshaft and crankshaft together so that the valves can open and close at the same time. The engine can operate much more smoothly that way. That is why it is so critical for your timing belt to stay functional.

The timing belt is subjected to a lot of wear and tear. It must be replaced periodically to prolong the life of your engine and ensure the integrity of the timing system. Look at the owner’s manual of your vehicle and see if they have recommendations for how to maintain the timing belt. 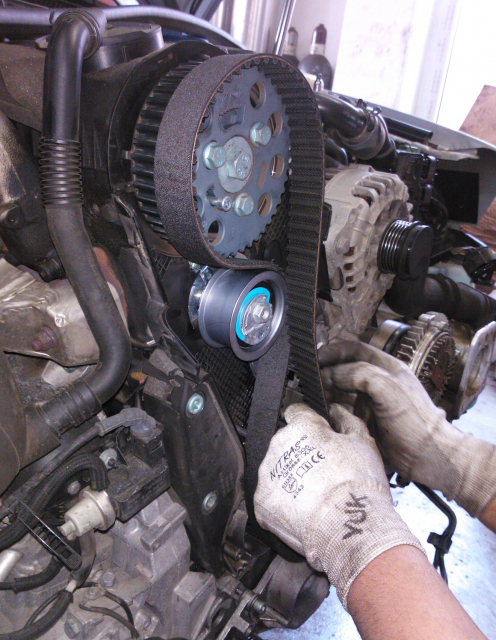 Most car owners don’t realise when they’ve surpassed the number of kilometres recommended for changing the timing belt. If you don’t maintain your timing belt regularly, then you could end up paying a lot of money for a replacement timing belt after it malfunctions. You cannot repair a worn-out timing belt, especially if it snaps. If you are driving on the road and your timing belt snaps all of a sudden, then your camshaft won’t turn anymore and you will need a tow truck.

As a result, a few of your valves won’t be able to close. The pistons will continue to move up and down by the crankshaft, but that’ll cause them to hit the engine valves while they’re open. The valves will suffer a lot of permanent damage from this. The cylinder head, block, and pistons will get damaged too.

Therefore, do not neglect the maintenance duties of your vehicle. If you don’t replace a worn-out timing belt fast enough, it could cost you thousands of dollars in damages. The timing system of your vehicle will be destroyed and possibly your engine as well.

The Symptoms of a Bad Timing Belt

If you can learn to recognise the symptoms of a bad timing belt, you’ll know when it needs to be replaced. Then you can protect your engine from incurring any expensive damages.

Let’s explore the top 5 signs of a bad or failing timing belt.

When your engine cannot turn over properly, there is a problem. The cause of the problem is difficult to identify because it could be attributed to any number of issues. Turn on the ignition and try to listen to the sound of the starter motor. If you hear something coming from the starter motor, then the timing belt is probably the issue.

The issue pertains to a timing belt that is wearing out. As the belt continues to wear out, it will eventually slip out of place and consequently open the engine cylinders. They will no longer be synchronised anymore. The timing of the engine won’t be calibrated properly anymore, resulting in an engine misfire and inability to turn over.

If it looks like your engine is failing because of a worn-out timing belt, then you need to have a mechanic replace it right away. Otherwise, you run the risk of permanently damaging your engine.

2) Weird Sounds Coming from the Engine

Timing belts that are too old or worn-out will definitely make strange sounds after you start up the engine. They’ll also make sounds when idling and accelerating too. If you hear noises like these, then you need to have a mechanic replace the timing belt.

Another indicator of a bad timing belt is abnormal engine vibration. This means you need to replace your timing belt too. A rough-running engine could indicate a bad timing belt. You’ll experience all sorts of symptoms when this happens, such as reduced power, screeching sounds, erratic RPM counts, shaking, and idle bouncing.

The little teeth of the timing belt are supposed to grip the gears while in motion. This causes other components of the engine to rotate and move. But once the teeth get too worn out and start breaking off, the gears begin to slip. Then you’ll experience engine stalling and engine failure.

If certain teeth of the timing belt are skipping or jumping, then you’ll lose power. Then you’ll have a rough engine with a “check engine” warning light turning on and unusual idle bouncing. Get your engine and timing belt checked at this point.

When the “Check Engine” warning light illuminates on your dashboard, it means your engine is experiencing some kind of issue. It could be a bad timing belt or any number of other things. The timing belt may have slipped or gotten loose. Perhaps it lost a tooth and ultimately failed. In any event, do not ignore the warning light. Have a mechanic run a diagnostic test to see what is going on.

Do you see lots of exhaust fumes coming from the tailpipe of your vehicle? If so, one possible reason could be a worn-out timing belt. This causes the engine to become overworked, which produces lots of exhaust fumes. Your tailpipe will emit very thick smoke when the timing belt is worn out because fuel cannot burn efficiently. The valve timing is off too, so they’ll open and close at unusual times.

Contact a professional mechanic and let them investigate the health of the timing belt. If any of the symptoms mentioned above are present, then have your mechanic replace the timing belt for you. The earlier you catch this problem, the better chance you’ll have of preventing any damage from happening to your engine.